The concept of equality has existed in the American society for a long time. Such laws as the Equal Pay Act of 1963 emphasize the importance of equality in the workplace by warning employers against discrimination of workers on the grounds of race, sex, ethnicity, or age. However, the struggle for gender equality as regards payment has been persistent causing many researchers to conduct studies on the problem. The paper addresses the reason why women earn less income compared to men. The paper uses the conflict theory to explore the different factors that facilitate the issue of inequality in pay between the two genders. The paper presents different qualitative and quantitative information attempting to examine women's income in comparison to that of men. Based on the preliminary results, the gender pay gap continues in the American society. In 2013, women workers were still earning about 77 cents for every dollar a man made. A conclusion can be drawn that the myriad of existing laws and social policies that aim to advance equality of income between the male and female genders are not sufficient. They have failed to eradicate the problem. Therefore, the paper proposes other measures, such as the development of social policies targeting the income inequality in the private sector and the adoption of measures aimed at women empowerment. Moreover, people should also demand the application of social justice.

In recent times, the gender gap in wages has become a prevalent social problem. The research presents the main causes of the gender pay gap between male and female workers. It also provides solutions that are needed to solve the gender pay gap problem. The solutions include social policies targeting payment in the private sector, the concept of social justice, and measures aimed at the empowerment of women. The research presents statistical data from the United States Bureau of Labor Statistics, which depicts the income disparities between the two genders. The paper applies the sociological conflict theory and specifically uses its status composition and social closure models to analyze the problem and explain the cause of gender inequality in wages. From a sociological point of view, the research plans to explain the topic of the gender pay gap and hypothesize about women still struggling even nowadays to receive equal pay due to the gender role stereotyping and discrimination they face from their employers and male employees who limit their opportunities. The primary method used to collect data in the paper will be archival and statistical study.

The section analyzes literature based on the key aspects that contribute to the gender income inequality. The gender pay gap refers to the disparity between male and female income as a percentage of the male earnings. Despite the advances in society as regards rights and social equality, women still receive less income compared to men. According to Ritzer, for an economy to be optimal in terms of functioning, women’s skills should be utilized in the fields where they can best apply their expertise. Unfortunately, in the United States, a woman earns 77 cents for every dollar that a man makes. The case is even worse for Latin American women who earn 53 cents and African American women who make 62 cents for every dollar that a man makes. Most countries guarantee women and men equal rights under the law in the instance of marriage, inheritance, or the ownership of property. Unfortunately, at the workplace, the equality of women is measured using the normative standard of men's lives. McBride and Parry, therefore, conclude that despite the advances in equality in other areas, women still search for equal rights in income distribution that are unavailable to them.

In the history of the United States when the nation was an agricultural economy, men’s role was to labor on the farms while women worked at home. It presented a hierarchical sexual division of labor with men on top and women at the bottom of the hierarchy. When the nation changed to a market economy, and, for instance, clothes became available for purchase, women’s work, such as clothes making, was rendered less valuable. Women then became dependent on men and were evaluated in comparison with men, hence creating a gender role stereotype. The stereotype related to discriminating and valuing women comparing them to men is a huge factor that contributes to the gender pay gap.

Conflict theorists blame gender disparity on the gender occupation segregation and the exclusion of women from lucrative jobs. Conflict theorist Marx Weber used two models to explain the gender pay gap. In the first one, the status composition model, Weber posits that occupations are compensated differently depending on the gender status of the typical occupant. It explains that the cultural devaluation of women’s work accounts for the low pay of female occupations compared to the male professions. Occupations that have been stereotyped as women's, such as nursing, are treated as low-status jobs. Most of the time, it is man's dominant status that influences the perceptions of the value of stereotypical female occupations. Men's occupations are considered to be more lucrative while women's are less profitable. Therefore, male occupations are entitled to more earnings compared to the female professions.

Suffering from paper writing?
We help you to come through!
Hesitating No doubts!Order now

In the second model that is called the social closure model, Weber posits that men practice gender occupation segregation. Men as the dominant group whether as employers or employees actively seek to maintain positions of power by protecting employment opportunities and other vital resources and limiting the access of women workers to them. They use their influence in the labor market dynamics to prevent female employees from getting lucrative positions or promotions that would increase their income status and lower the gender pay gap. Friederich Engels, also a conflict theorist, borrowing Karl Marx’s concept of classes in the society, called it the reinvention of the bourgeois and proletariat classes. Men are the bourgeois class who develop the means of subduing women who are the proletariats in the new society. A woman working in a company dominated by men may feel segregated when men decide to work together to ensure that she does not get prestigious job ventures and contracts. Employers, on their part, may choose only to give male employees high-risk high-reward business opportunities and restrict female workers to routine jobs in the workplace that pays less income. However, men are smart in their domination. As they do not want to appear to be discriminative against female employees, which is punishable by law, they simply exclude their subordinate competitors (women) from the desired jobs. It is the most straightforward social closure strategy.

The research uses the results of the 2013 current population survey jointly conducted by the U.S. Census Bureau and the U.S. Bureau of Labor Statistics. According to the 2013 current population survey, women who are full-time salaried employees had median weekly earnings of about $706. On average, women made 82% of the median weekly earnings of male full-time salaried employees' earnings, which were $860. The differences in earnings between women and men were more pronounced for the Asians and whites than for other ethnicities. African American and Latin American women and men had roughly the same earnings. Therefore, the gender pay gap was less pronounced. Overall, the chart depicts the persistence of the gender pay gap with men always earning more income compared to women. 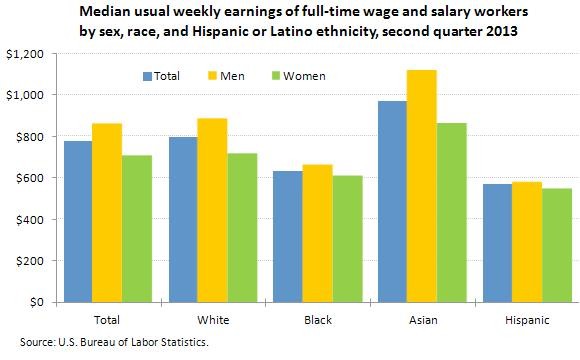 In the second research, which was also based on the earnings of women and men in 2013, the median weekly earnings for those working full time in management, accounting, business, and financial operations jobs were higher than in any other occupational category (see Figure 2). Women received the median weekly earnings of $1049 while men earned $1412. It proves that even in the high ranking professional occupations, the gender pay gap continues to exist. Only for such jobs as cooks and cashiers, one could say that the gender gap was reducing. 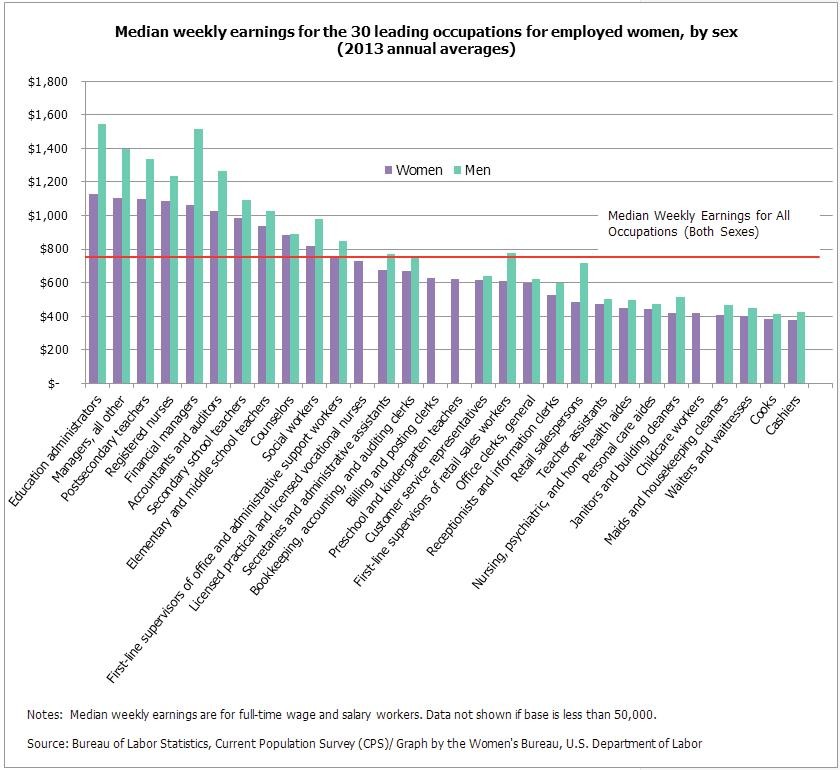 The second chart shows that the gender wage gap varies discriminatively across the range of professional occupations. The pattern provides the empirical proof of the social closure theory. The second chart illustrates that the higher a woman goes in terms of the professional occupations, the greater the gender pay gap becomes. For example, women who are educational administrators had the median weekly earnings of slightly above $1100 while men in the same field made median weekly earnings of above $1500. It is attributed to employers and male workers restricting the professional growth of women in their occupations. By subordinating and obstructing women from economic advancements in their professions, men are able to maintain power.

The findings reflect the current status of the larger American society. Women all over the country are earning less than their male counterparts, which reflected in the data from the U.S. Bureau of Statistics. In fact, the higher a woman moves up the career ladder, the larger the pay gap between her and her male counterparts becomes. Moreover, the research indicates the inadequacy of social policies that promote equality in payment between male and female workers. The policies may be even viewed as the mechanisms that create and sustain inequality rather than reduce or eliminate it. Perhaps, more social policies are required, and the findings can be applied in the creation of the more effective ones. Moreover, social policies addressing the private sector may be difficult for the government to implement. Therefore, non-governmental organizations can help reduce the gender pay inequality and discrimination in the private sector by advocating for effective policies.

Get to know about our research paper writing service. At EssayStore.net we work hard to provide high quality written research papers online to our customers. Don't hesitate - order now!

It is also time for the society to follow the conflict theorists’ perspective on the gender pay gap. They advocate for the balance of power between the genders. One way of achieving it is through providing equal payment opportunities for both women and men. The society needs to take more measures in terms of legislative and social policies that will guarantee women equal pay. The United States has been addressing the issue of the gender pay equality and reducing income inequality between male and female workers. The government has passed the 1963 Equal Pay Act that prohibits sex-based wage discrimination of men and women in the same careers who possess similar skills and work under similar conditions. However, laws are not enough. Women need to be empowered to fight for equal pay. Women’s work has become valuable due to education. Therefore, they should become aware of their worth and use it to negotiate a better pay at the workplaces. Furthermore, all citizens should apply the concept of social justice. It will guarantee that women’s right to equal pay is protected and valued by all.

Even though women’s accomplishments in society have increased, they are still struggling for equality in pay. The research has proved the hypothesis that the gender wage gap exists in the American society. In following the conflict theorist’s model of social closure, the study demonstrated that male employers and workers restrict women in their access to lucrative opportunities. The study also uses the status composition model to prove that most women have low-status jobs because men have used their dominant status to induce the society to view female occupations as of low status. The study proposes that women should be empowered to fight for equal pay. It also recommends the enactment of efficient social policies, especially in the private sector, to fully combat the gender pay gap. Finally, the application of social justice would contribute immensely to ensuring that women enjoy their right to equal pay.