Get Inspired for Writing by 7 Most Unexpected Sources 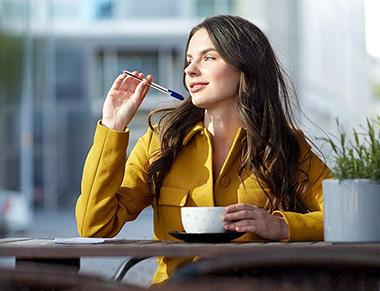 One summer afternoon, when Mr. Tolkien was reviewing a pile of college exam papers, he saw a blank sheet of paper lying among other pieces. Suddenly, he got struck with a thought, which he wrote down on that blank sheet. This thought was about a hobbit who lived in a hole in the ground.

During more than 20 years, Tolkien has been creating his masterpiece “The Hobbit” and “The Lord of the Rings.” His source of inspiration was the native country, England, and some trips abroad with the family.

As for the novel's negative character Smaug, the idea was borrowed from Beowulf, the famous ancient English poem. While the dwarves, Middle-earth inhabitants, could possibly be taken from the Grimm's Fairy Tales. They say that the language Tolkien's characters talked reminded the one used in the Iceland's Old Norse sagas. Finally, the idea about the ring appeared when Tolkien visited the archaeological dig.

This outstanding writer's example proves that inspiration can come from everywhere, especially from things you are deeply interested in and which affected your childhood.

7 Most Unexpected Sources, Which Inspire You for Writing Despite the Genre You're Writing In

Following Tolkien's example, you can find the inspiration from such outside sources as cinema and theatre. Tolkien managed to create his fictional stories on some archeological and mythical evidence, while you can do the same watching a performance of a movie.

As we all know, art is aimed at imitating the reality. You may find a great number of plays and movies based on some real historical personalities or events happened in the past.

Watching a movie or a play, you may be surprised at finding yourself really engaged in the story's historical background, period of time, other events and people who played a crucial role in the decision-making, and such consequences, etc. There is no such strong force for fueling a great essay more as mere curiosity.

Films belong mostly to fiction, while documentaries are purely non-fictional. A good movie can appeal to you and force you to conduct more profound research on a particular subject of your interest, while a documentary film gives you many important historical facts of the subject of your research.

When you find a documentary film which gets you really involved and interested, then you may be sure that you managed to find another great source for your research before it actually starts.

Podcasts differ from documentaries only in that they are distributed as audios. It gets really impossible to count how many podcasts are available to us in so many subjects. Scientific, historical, political, and many other kinds of podcasts are on a click's distance from people.

Unavoidable truth is found in the words that reality is weirder and tougher than fiction. There are millions of tons of sources of inspiration in the past generations. Just dig deeper.

Watch the History Channel, visit museums, look up encyclopedias, and spend hours in libraries. You will surely find some hidden treasures which reveal you some vital truth.

Another even more engaging source of inspiration is someone's history, personal records. Your grandparents, old friends, and neighbors can serve as the best story-tellers. They may provide you with many good topics and inspire to do a breakthrough in your field.

You can watch history in your own eyes, it's making every moment of your life. Another good inspirational sources for you are current politics and news. Unpredictable and controversial events happening right beside you need your full attention.

Stay updated, watch around, make right conclusions, and you will be able to draw a connecting line between the current events and the past ones, which gave rise for what is happening now.

No doubts, it is extremely interesting to know the past and the present, but it can be even more interesting to predict or just watch ahead of our times where there have never been anyone. Explore new ideas with modern technologies. Try to predict the future observing the present.

When you try to analyze today's scientific and technological works, you get surprised of the increasing number of stories created on the topic and acknowledged by the audience. Try to think about science and modern advanced technologies as about good source of inspiration for creating your own masterpiece. You'll be amazed at how good you are at it.

Eternal and quite mysterious source of inspiration. A great number of scientific and fictional papers were written describing different complex processes happening around us. And still despite the popularity of many subjects, this topic draws more and more attention. More or less understandable and reliable explanations are given by the scientists only to a tiny percentage of things functioning in nature. The space, everything that inhabits it, and what it consists of are still open subjects. Every day you may find more and more information published on the topic. Your own findings would be good additions to the existing explorations.

Nature was the eternal source of inspiration in fiction. Many authors of all generations being deeply moved by nature's indescribable beauty and its constantly changing mood used nature to foreshadow, compare, or contrast their characters' moods, and actions they were performing. All poets were considered genius thanks to nature and their inborn talents to observe its moods. Thus, love became a red-red rose, while anxiety and opposition to some external irritants cause a storm in the inner world of a character.

Try to stop for a while and see. Look around you, observe, prick up your ears and listen. You will find so many valuable topics for scientific, as well as for fictional, depictions of nature. Release a scientist or a poet from within you.

Hope these 7 most unexpected sources of inspiration will be helpful tools for you, and inspire you to create world acknowledged masterpieces. Good luck!